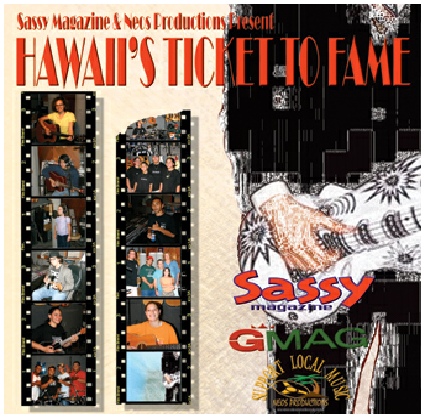 Six savvy solo artists and two talented bands are ready to make their mark on Hawaii’s music scene with the release of “Hawaii’s Ticket to Fame.”

This promising compilation, featuring 10 original songs, started with a contest sponsored by teen oriented Sassy/G Magazine and Neos Productions. With a desire to create a “real world” experience for students on Oahu who dream about a recording career, contestants were required to compose a song, perform it as a solo act or as a member of a band and submit their performance as a demo on a cassette or CD for consideration.

To maintain the “real world” theme throughout the recording process, producer Bob St. John put together a dream team of seasoned professionals who performed as studio musicians if needed and, along with the producer, offered creative advice to each artist during studio sessions.

Representing a variety of schools on Oahu and nearly as many genres of music, “Hawaii’s Ticket to Fame,” introducing the laid back island styling of Na Pu’ukani and Kaleo, alternative ballads by Emerson and Tiyana Fao, the edgy punk of Ian Hein, country rock by Teiler Miller, hip hop by Runaway Statue and the whimsical pop of Katie Callahan, captures the heart of Hawaii’s teen music scene, and provides a kick off point to a career in entertainment for these talented young hopefuls.