Justin Young was still in high school when he won a song writing contest in 1995, and was given the opportunity to record his first album.  Though it was early in what would prove to be a very successful career, Justin showed his versatility as a musician, playing keyboards, guitar and ukulele; and as a songwriter, penning six of the ten songs.

Like Hawaii’s diverse multi-cultural music scene, No Better Time than Now is a mix of traditional Hawaiian, island contemporary, pop and reggae.  While traditional Hawaiian is represented with Pau’ oa Liko Ka Lehua and Ikona, Justin’s originals, Windward Side, Only Home I Know and Aloha Spirit embody the essence of island contemporary - a deep love for the islands. Justin’s ability to write heartfelt pop ballads is apparent on the tender Raining Every Day and the insightful No Better Time than Now.

The upbeat island reggae, One Year Together, performed with Kekama Emmsley, secured Justin’s place at the table with reggae music fans, launching an amazing musical journey for this exceptionally gifted artist..

Like Hawaii’s diverse multi-cultural music scene, No Better Time than Now, the debut release by the accomplished singer/songwriter Justin Young, is a mix of traditional Hawaiian, island contemporary, pop and reggae. 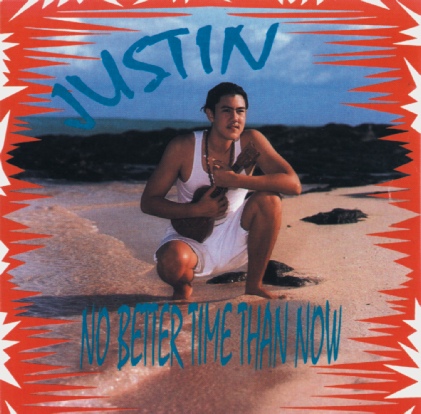